Everyone deserves to achieve his or her optimal level of function and quality of life, regardless of medical history, age, or physical condition. Our bodies have the ability to heal and function without pain if treated well. My goal as a Physical Therapist is to be an expert resource for my clients. To achieve this goal, I have developed a unique mixture of traditional medical practice combined with a holistic, hands-on approach.

My educational pursuits include both conventional medicine and non-traditional techniques. I have treated patients in all settings, including acute care hospitals, in-patient rehabilitation settings, home care, and out-patient therapy. My extensive education and diverse experiences allow me to analyze a person’s movement patterns and listen to his or her history with a unique perspective. I believe success is attained when I partner with my patients to provide innovative therapies, create maintenance programs, and counsel on lifestyle improvements and preventative care. 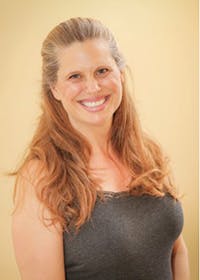 Amy graduated from Thomas Jefferson University in 1992 with a Master’s degree in Physical Therapy. When she first graduated she was frustrated by her limitations so she immediately focused on expanding her education and effectiveness. Once she took her first class she was hooked. She loves learning and applying new information to help her patients. Throughout the years, Amy’s areas of focus have expanded based on the needs of her clients. She was drawn to manual therapy because of the healing power of touch and has refined her skills to be more precise and effective. She studies movement and loves to solve the puzzle of how to move more easily and how to be more comfortable in your body. The more she learns, the more she wants to learn. When not with her patients, Amy lives in Bucks County, Pennsylvania with her husband and 3 children. She regularly teaches and practices yoga.